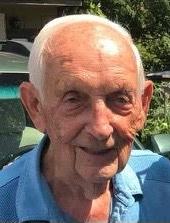 Charles William "Bill" Albrighton, age 97 of Port Vue, passed away at home on Friday, September 23, 2022.  Born August 11, 1925 in Pittsburgh, he was a son of the late Charles W. and Emma (Marsh) Albrighton.  The retired proprietor of Bill's Barbershop on Versailles Avenue in McKeesport, Bill was a member of Port Vue United Methodist Church, a US Navy Veteran of World War II sering in the Pacific Theater as a Seaman 1st. Class, and an avid golfer and bicyclist.  Besides his parents, he was preceded in death by his wife of 62 years, Betty (Brunory) Albrighton, who passed away on April 24, 2012, and his six siblings: Betty Warren, Joan Scheetz, Sylvia Nestler, and Dorothy, Ed, and Jack Albrighton.  Bill is survived by his daughters Rae Anne (John) Bosnyak of Cranberry Twp. and Diane "Dee Dee" (Blase) Bartko of Mount Vernon; his grandchildren Whitney (Zac) Cumpston, Paige Bosnyak, and Grant (Stacey) Bartko; his great-grandchildren Wyatt and Emmett Cumpston and Benjamin and Blase Bartko; and also many nieces and nephews.

Friends will be received in the Daniel F. Bekavac Funeral Home and Crematory, 4504 Walnut St., Versailles Borough, McKeesport, PA 15132 (412-678-3454) on Monday, September 26, 2022 from 2 PM until 8 PM.  A Funeral Service will be held on Tuesday, September 27, 2022 in the funeral home at 10 AM with Rev. Hyung-Suk Joe officiating.  Procession and burial with military honors will follow in Round Hill Cemetery, Elizabeth Twp.  www.bekavacfuneralhome.com